The Longest Cocktail Party is one man's account of the history of the Beatles' company Apple Corps, the break-up of the Beatles, and the beginning of their solo careers. The title is a reference to the press office's habit of entertaining members of the media, and the company's potential business partners, with expensive drinks, luncheons and perks – which ultimately led to a financial and spiritual hangover, as did the unrealised potential of the company.
DiLello served as the "house hippie" (formally termed Client Liaison Officer; a sort of in-house youth consultant and gofer) at Apple's Savile Row headquarters, from 1968 until 1970, becoming one-on-one acquainted with each of the Beatles, many of their wives and girlfriends, and also the inner circle of agents, managers, and others who worked for and with Apple. These included business manager Allen Klein, attorneys Lee Eastman and John Eastman, road managers (and Apple directors) Mal Evans and Neil Aspinall, press agent and author Derek Taylor, members of Apple bands Badfinger and White Trash, the staff, and the countless visitors to the office.
DiLello covers events including the launching parties for Apple Records and artists like White Trash and Mary Hopkin, the ill-fated Apple Christmas party in 1968 (with two Hells Angels as guests), the Beatles' rooftop concert appearing in Let It Be, the lawsuits that began as the Beatles grew apart, and finally the closing of the Apple press office. His reports are described first-hand, always with a sense of humour, and a sense of hope. 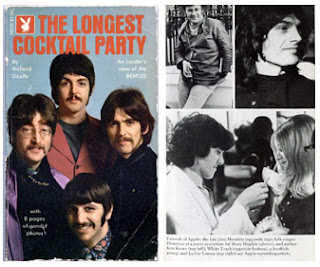